Just Released, and a sweet chance to win! 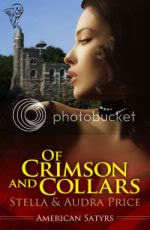 JUST RELEASED: OF CRIMSON AND COLLARS (American Satyrs book 1)
A prince without a kingdom, and a princess without a master. A Satyr's passion knows no bounds.

As a princess of the Satyr confederation, Minerva has been coddled, spoiled and revered, as well as taught and trained just how to serve her Satyr. Beautiful, sexy and a prize in herself, she's anxious to meet the man that will become her lover, master, and reason for living.

Esben Chambers, a half demon, half something else orphan lives on earth with few cares or ties. His family partially unknown, he's embraced his Strigo, or time demon, heritage, though some of his powers are well out of the scope of the lords of time.

When an Imp shows up at his estate and claims he's the only living Satyr prince to clan Tempest, Ben realizes there might be something to figuring out just who his father's people were, and agrees to go to New York for a Convergence Summit. He's counting on figuring out why he was left alone in the world.

What he doesn't count on is the enchanting woman he sees in a floor show, the woman that makes his blood burn to possess her.


Audra and I are extremely excited to have this book out finally and love that it is with Total E Bound! To celebrate the release, we are giving away a fantastic gift basket! This gift basket contains a t shirt with the awesome cover on it, as well as a tote bag with the cover, a set of playing cards (cover on the top) a signed cover flat, other promo, print book OF READERS CHOICE and a one of a kind set of earrings created for the book release in sterling silver, fire opal, smoky quartz and crystal.

So how do you win? buy the book today, and email us (Stella@stellaandaudra.com) with the answer to this question: What is the name of the first girl in the book? You have until September 29th to get your entry in!