I keep getting emails from people asking "why is my favorite author NOT on that list so far, and why haven't you invited them?"

To answer: We invite ONE AUTHOR EVERY YEAR: the Master of Ceremonies. Everyone else emails me personally about it. If you would like your favorite author to attend, they MUST EMAIL ME about it. And here is the reason: Invitations give the idea that the person invited doesn't have to pay to attend. EVERYONE has to pay to attend AAD (even myself.) So, if a person contacts us about AAD, they know already they wont be getting a free registration for the event if they attend. They will know that all rules also apply to them.

Hope this clears things up a bit, and thanks for all the emails and questions.

Posted by Stella Price at 10:53 AM No comments:

So what do all these authors have in common?

Who could have guessed when we decided to band together to do a group blog all those years ago that it would become not only a blog, but a convention, and that our own Stella would step up and become Con Director Extrordinaire? Certainly not me. But I'm so proud to be part of this group and to have been here from the beginning.

That said, I think some of you may realize by now that I can't attend this year's con in NOLA. A lot about my life has changed pretty drastically in the last two to three years and for personal reasons, I just can't make it to New Orleans this year. But I really hope you all have a wonderful time! Judging by the extravaganza last year in Phillie, I'm certain you will!

So now I feel obligated to give myself a little plug (that's part of what blogging is for after all, isn't it?) and mention my first (and second) self-publishing ventures.

By now you might've heard about KING OF SWORDS, a novella that had been previously released in a somewhat limited fashion (as part of an anthology) by Phaze Books. Well, it's out now - on its own - and it has a sequel!

KING OF CUPS is the second book in what will be a four-part series of novellas based on the kings of the tarot and playing card decks. What most people don't realize today is that each of the tarot suits (swords, cups, staves and pentacles) corresponds to a suit in the deck of playing cards we all know and love. Also, each of the kings represents a real king from history.  I've used their names and suits for the heroes and titles of each of my books. And to tie it all together, in each story, one of the characters reads cards to tell fortunes. ;-)

Here are the blurbs, in case you want to know more:

David is a newly retired special ops soldier, looking to find his way in the unfamiliar civilian world. His first step is to visit an old friend, the owner of a bar called The Rabbit Hole on a distant space station. While there, he meets an intriguing woman who holds the keys to his future.

Adele has a special ability, handed down through her mother's line. Adele can sometimes see the future. She doesn't know exactly why she's been drawn to the space station where her aunt deals cards in a bar that caters to station workers and ex-military. She only knows that she needs to be there. When she meets David, sparks of desire fly between them and she begins to suspect that he is part of the reason she traveled halfway across the galaxy.

Pirates gas the inhabitants of the station while Adele and David are safe inside a transport tube and it's up to them to repell the invaders. But what good can one retired soldier and a civilian do against a ship full of alien pirates? Both will discover there's more to each other than meets the eye as they do their best to overcome the alien threat and retake the station.

Alexander is the proprietor of a working class bar called The Rabbit Hole. One of its best features, in his opinion is the petite woman who deals cards and sometimes foresees the future.

Della is an undercover operative working for the same intelligence service as Alexander, though he's only just come to realize it. She follows her visions of the future, with her employers' encouragement, to put her in the right places at the right times to do good for the human race. Lately, the right place has been in Alex's bar and the right time is quickly approaching. It'll be a turning point, both for her personally and for the warring races of humanity and jit'suku.

When the heir to the jit'suku empire is attacked, Della and Alex race to save him. Taken aboard the alien ship, Della and Alex must deal with a series of unforeseen events which put their lives and millions of humans and jit'suku in dire jeopardy. Can they find solutions for not only their people, but for themselves and the forbidden love they discover between them?

Both of these books are now available in ebook formats from Amazon, Barnes & Noble, ARe, Smashwords (for all other formats), and several other ebook retailers. Enjoy!

Bianca D'Arc
Come over to The D'Arc Side... www.biancadarc.com
Posted by Bianca D'Arc at 3:01 AM No comments:

Now through March 7th, my newest release, Callum, is free on Amazon! This is the first of The Cursed Clan series which will be featured along with my upcoming Victorian vamp series By Blood at my Cursed n Blood Affair at NOLA AAD. Below is the blurb and the links for the book. Please spread the word! 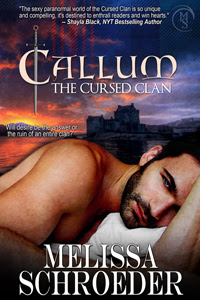 Will desire be the answer or the ruin of an entire clan.
The Cursed Clan, Book 1

As Laird, Callum Lennon feels he has always failed to protect his cousins. Callum's impulsiveness caused the death of his father and the experience has scarred not only his body, but his soul. From that point on, he made sure to always go with the more logical choice in every matter. When his younger cousin Angus finds clues that might help break the curse, Callum begrudgingly hires Phoebe Chilton to investigate. Callum doesn't like bringing outsiders into their family affairs. Their life would become fodder for the tabloids if anyone were to find out about the curse. It doesn't help that the instant he meets Dr. Chilton he's attracted. But, he doesn't really have a choice because she might be their last hope.

An expert in archeology, Phoebe has always been dwarfed by her parents' shadow. Their high standards had her in college by thirteen and earning a second PhD by twenty-two. But her career and her broken marriage have left her needing something more than just diplomas and degrees. She wants to prove that her interest in legends, especially Celtic legends, is as important as her parents' work. When the Lennon family contacts her, she sees the opportunity to win a massive research grant. With a long-time rival breathing down her back, she jumps at the Lennons' offer her, hoping it will ensure her the grant. But uncovering the Lennon family secrets, and her attraction to Callum, could prove more than she can handle.

Forces outside the family are determined to ensure that they fail. When an old enemy threatens both the well being of the clan and the fragile new love, Callum will have to choose between believing his mind or his heart.

This is a paranormal sensual romance, approx 65000 words. It is the first book of The Cursed Clan.
Posted by Melissa Schroeder at 10:08 AM No comments:

Five months till we all converge on the awesome city of New Orleans!  We hope everyone is doing well and that you all had a fantastic February.  The bloggers were super busy last month and did a wonderful job of interviewing the Featured Authors that will be joining us this summer! In case you missed any of your favorite Authors’ interviews or if you want to read up on some new-to-you Authors check out these links and leave a note for the bloggers and authors. They are pretty great at answering back and giving away some great reads! (Cause who doesn’t love the occasional free book?!)

We have 4 spots available for the con but NO ROOMS AVAILABLE. this poses a problem... therefore, If you know someone that is GOING and has room in their room (please bear in mind that 95% of the sleeping rooms are KINGS) PLEASE email me (Stella Price) so we can get your set up. This is the only fair way about it, that will allow ME to keep my head especially because we are completely OUT OF ROOMS and cannot accommodate someone that wishes to attend but needs a personal room. We have SOLD OUT OF OUR ROOM BLOCK. Thank you.

Posted by Stella Price at 9:46 PM No comments: