Hi, all! This is my first post at the blog. Back in . . . oh, July-ish, the lovely Stella invited me to post here "whenever I had time." Hahaha! 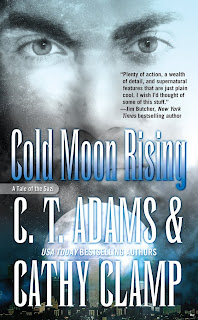 So, here it is, nearly October, and I STILL don't have time. But I'm going to post anyway, because it's a very cool blog and I wanted to post at least once before someone shuts the door in my face after the Authors After Dark convention.


For the regulars here who don't know me, I'm Cathy Clamp and write paranormal romance and urban fantasy for Tor Books, along with my co-author C.T. Adams. You'll see that my screen name here is "Cat Adams" and that's because it's our NEW name for the same great books. It's just a little easier to find in the bookstore. We write the Tales of the Sazi and Thrall series and will be coming out with a brand new urban fantasy series called The Blood Singer next year. Cold Moon Rising is our latest book in the Sazi world, out last month, and next up, in March, 2010 is Serpent Moon, in the same world.

Our first book under the Cat Adams name was Magic's Design, which came out in March. It's a stand-alone novel, not part of a series, and if you like urban fantasy, you'll really enjoy it!


I've been spending a whole bunch of time working on details lately. Editing is mostly about details, in reality, and it forces you to really think about all those weird, esoteric things that you truly believed you made clear in a book, but which the editor firmly informs you that you didn't. This last month has been especially challenging because of all the projects that have had overlapping deadlines. Mostly, it's because I have a hard time saying no to really cool projects (I mean, how could you say no to an antho called Chicks in Capes?! This is a proposed cover by the way, one of two. Interestingly, they'll release BOTH covers, which is very fun!)

Little by little, I took on new projects. None of them were big, and I gave myself plenty of "room" to get them done. Or so I thought. But what wound up happening was this:

Edits for Anthology story #3.
Finish up book Second book of new urban fantasy world (which we had to get extended---hmmm, I wonder why.)

As you might guess, even with a wonderful co-author who's taken on half the load, I'm getting a little twitchy. Each kind of writing (new or editing) has its own challenges and forces an author to 'shift gears' to a new mindset. But the back and forth between the various worlds and the various kinds of editing/writing has me either totally ignoring, or micromanaging, every other aspect of my life.

Take the Authors After Dark convention. I signed up and got my room, but OOPS! I forgot to . . . um, pay for the registration. [blush] Then, since I seldom get to New York, I decided it might be a good idea to make plans to meet with my agent and our brand new editor in Manhattan. So I booked an early morning flight and have been figuring out the details of arriving at New Jersey-Liberty, hopping over to Manhattan and then popping up to Suffern. Now, for those of you who are gasping and choking at the potential for those events in a single day, remember that I live in TEXAS, where it takes about an hour of driving, one way, just to get to the grocery store. Twenty minutes on the AirTrain from the airport? Pfft! Nothing. Another half hour of walking when I get to Penn Station? Easy. Then it's just a short hop back to Penn Station and an hour on the train to Suffern, a cab ride to the hotel and poof! Lots of missions accomplished!

Details, details. And speaking of which, I think I'm out of my micro-managed time to write this first post. Can't wait to meet you all next month---if I haven't keeled over by then. :D
Posted by Cathy Clamp at 8:00 AM

I thought I was busy! Woman you completely wow me!

Nah, well yeah there is, but I dont see it as craziness, but as determination and a love for your craft *wink* think of it like that, its much easier.