Not sure what's going on with this blog... Admittedly, it's morphed into something the founding members (of which I am one) never anticipated, but are very happy about. Stella's found her groove, so to speak, and taken the AAD conference farther than any of us could have imagined. Still, I'm not 100% sure if this blog is supposed to be soely for the purpose of con news or if we're still supposed to talk about other stuff here on our appointed day.

Nevertheless... I received a reminder that I was supposed to blog, and therefore, I shall. I haven't been very vigilant about blogging or even answering email for the past several months, but I'm trying to change my ways and get back to the responsible blogger and correspondent I once was. Bear with me while I try...

This month, I have a new book! (Haven't been able to say THAT in a while.) I know it's been a long wait, but I'll have a brand new novel out on October 25th from Samhain. It's called HIDDEN TALENT and it's a very hot futuristic that lives up to its warnings! :) 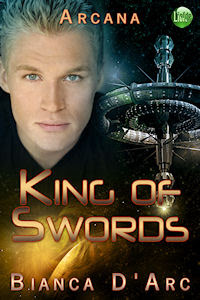 After that, I'll have a novella out in early November called KING OF SWORDS and it's sequel, KING OF CUPS, out in early December. I'm also getting things lined up for next year, including a new paranormal novella that will release sometime around Valentine's Day or slightly before. That story features one of the Redstone cousins, a werecougar who will really make you purr. ;-)

I've got a few more tricks up my sleeve for early 2012, including a new paranormal novel from Samhain called BROTHERHOOD OF BLOOD: WOLF HILLS, which will be out in April. Will keep you posted on all of this, of course, but for now...

Here's the blurb for HIDDEN TALENT:

While on an undercover mission to gather intelligence on the neighboring collective, Micah receives the shock of his life. A shy, reclusive horse tamer who possesses a level of raw psi Talent that nearly matches his own. Along with her pure, wild Talent, her beautiful spirit and innocence rouse him to take her on a voyage of discovery to the stars -- and the limits of her own, untapped passion.

All her life, Jeri has hidden her Talent, enduring the stigma of being "odd". Once aboard the Circe, Micah and his cousin Darak, a rogue of the first order, guide her through a world where those with Talents are revered, not hunted. Where pleasure hones and strengthens psi power to undreamed-of heights. Where love is a real possibility, not a distant dream.

When a defenseless planet is besieged by the collective's armada, the Circe races to the rescue -- only to discover a missing piece of Jeri's past on the wrong side of the battle. And that combining her formidable new powers with Micah's may win the day, but cost her everything...
I'm just so glad to finally have some new material coming out. It's been a while, I know, but it takes time to get things in the "pipeline" for publication. Finally, it looks like we're moving again -- in ebooks at least. As with most Samhain titles, HIDDEN TALENT won't be in print for about 10 months or so and the novellas are ebook-only for the foreseeable future.
For more information, as always, visit my website: http://www.biancadarc.com/, or look for me on facebook or the other places I hang out. ;-) I'll be posting more news as it becomes available.
Posted by Bianca D'Arc at 9:00 AM

YAYAYYAYYA MORE BOOKS FROM U!!!