Claiming More is off KDP Select

Hello everyone! This is my first post here. I recently became a Featured Author and I'm so excited. Thank you Stella!!!

Claiming More, book 2 in my Tiger Nip Series is finally off KDP Select. I've loaded it up to Barnes & Noble and All Romance eBooks. Kobo has been a bit funky lately so I'm waiting on that. I'm also still waiting for iTunes/iBooks to approve my books to go up there. 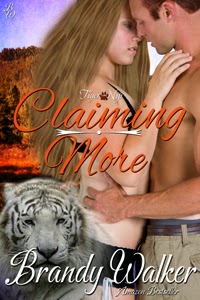 Sampson Hart has known Mary Jane Poppy for ten years. She’s his sister’s best friend, business partner, and has had a crush on Sam for years. When the mating pull hits him, he’s ready to claim her as his own. Given their history, it should be simple. Right?
MJ has loved Sam since she was fifteen. But being a hybrid, she’s been told all her life she won’t have a mate. When Sam proclaims she belongs to him, she doesn’t believe it; the mating pull isn’t there, and Sam isn’t meant to be hers.
Running back home to escape the love she feels for Sam, MJ agrees to become the companion of a man who lost his mate and has three young children to raise. It is the only way to set Sam free to find the one he is truly meant to be with.
Will Sam be Claiming More or will the one he desires the most find comfort in the arms of another?
Purchase Links:
All Romance eBooks | Amazon | Barnes & Noble
Posted by Brandy W at 12:00 AM