Can the devil be a romantic hero?

While daydreaming, I wondered if Lucifer, Satan, the Devil, whatever you call him, I wondered if he could be a hero - a romantic hero with honest love and respect for a woman.  I didn't want it to be a man called Lucifer or a devil of a character who finds love, I wanted to rework the actual evil incarnate into a dreamboat.  A dreamboat who isn't a neutered version, but one retains some naughtiness that he embraced for an eternity.

It was a blast to flesh out someone with the worst reputation known to exist.  So, was I successful in the challenge I set out to fulfill?  I think so, but now you can judge for yourself. 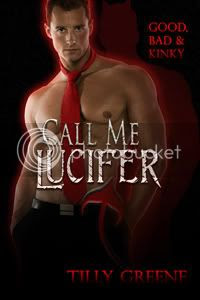 He is much more than the horrific job title and now he needs to prove it to her!

Lucifer, the Prince of Darkness, works hard dishing out punishments and asks for little in return, until now. He's been waiting an eternity for a woman who would bring out his gentle side, his need to love and be loved in return. He’d started to wonder if she even existed but at last he’s found her, in a courtroom arguing for a tougher sentence.

After his first introduction to Nia Adams, a sexy petite firebrand, he spends all his time on the surface at her side. They have a serious relationship and he’s sure the emotion bouncing between them is love. Then she lies to him about how she feels.

While difficult to hear, the lie opens a door. It gives him the only chance he’ll ever have to show her who the man behind the horrific job title really is. And he takes it with both hands.

Whoa I thought this was a joke!
I totally want to read this book!! :)

HA! No joke, just an authors imagination running free. Enjoy, because when it comes to bad boys, Lucifer is the ultimate :-)