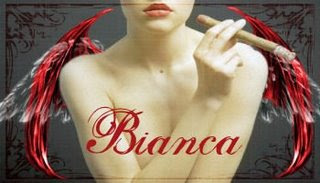 This is a great time of year and things have been going very well, indeed! I got to hang with Jacki and a bunch of other great writers at Lora Leigh's RAW a few weeks ago, I just got back from a fantastic sci fi con and I'm looking forward to a new release in just a few weeks.
Oh! And Sweeter Than Wine comes out in print at the end of the month! It's a sexy paranormal where my cat-shifters and vamps meet. Here's a little bit about it:

Sweeter Than Wine by Bianca D'Arc
ISBN: 978-1-59998-981-5
Length: 232 Pages
Price: 12.50
Publication Date: October 28, 2008
An abused woman has the power to unite werefolk, fey and vampire against an evil that would see them all dead—if she can learn to love again.
Christy lies near death after a brutal beating by her estranged husband. Her preternatural friends reach a desperate conclusion: The only way to save her is to turn her. Sebastian steps forward to take on the burden of being her Maker.
For him it’s no burden at all. She draws him as no other woman has for centuries. With the help of a werecougar friend, Sebastian teaches Christy about her new life and abilities, making certain she is as strong as he can make her. Only then can she face her abusive ex-husband and put her old life behind her. But Christy’s ex-husband is involved in something more dangerous than any of them had guessed.
Vampire, were, and even a fey knight must work together to put an end to the threatening evil. To overcome her past, help keep the darkness at bay, and fight for a new life with Sebastian, Christy must draw on all of her new-found strength.
Will it be enough?
Warning, this title contains explicit sex, graphic language, ménage a trois, hot neck biting and werecougar stroking.
Read An Excerpt Online
You can get more information about this book on the Samhain site, HERE, or you can even pre-order it from Amazon, HERE. In fact, all three of my upcoming print releases are already available for pre-order on Amazon. October is Sweeter Than Wine, December is Davin's Quest (Book 2 of my futuristic Resonance Mates series), and next March is FireDrake, my next Dragon Knights novel.
In keeping with the paranormal theme of the season, my next ebook release is a vampire story called One & Only. It'll be out in ebook formats on November 7th and is the first in a series of three vamp novellas that will be put together into a single print volume sometime next year. I'm very excited to see these coming out again. (They were previously released in much shorter versions by a publisher that is now out of business.) These new versions of the stories are much longer and more intense. I think (hope!) you'll like them!

For now, you can get more information on the Samhain site, HERE, but that URL will change once the book is released, so check it while it's hot! LOL. Of course, you can always find it on my site, HERE. And just to whet your appetite, here's a little bit about it:

A deadly crash changes the fate of one lonely vampire.

Vampire enforcer Atticus Maxwell stands at the edge of his own oblivion…until the faint heartbeat of a desperately wounded mortal woman calls him back. The terrible crash that almost took both their lives has brought him a charming, intriguing woman who just might give him a reason to live again.

Lissa was headed for a conference at a resort in a last-ditch attempt to find a job. Instead, on a rain-slick mountain road that almost killed her, she finds the love of her life. A love with the most eligible, reclusive vineyard owner in Napa Valley—one that isn’t quite human.

No barrier—not even breaking the news to Lissa’s friends—seems too great to hold back their blossoming love. Until they learn the accident that brought them together wasn’t an accident at all, but a murder attempt by an unknown enemy.

Atticus saved Lissa once. Can he keep her that way in the face of a renewed threat?

The second of these stories, Rare Vintage, will be released in February and the third, called Phantom Desires, will come out sometime later in 2009. All three together make up the Brotherhood of Blood and will probably go into print under that title.

Now aside from that little commercial, I've been writing up a storm. I finished a cat-shifter urban fantasy novel for which I'm trying to find a home, and have nearly finished my next Resonance Mates book, called Grady's Awakening. It's been a busy time, but very productive. Now I'm looking forward to Halloween, how about you? ;-)
Posted by Bianca D'Arc at 1:15 PM