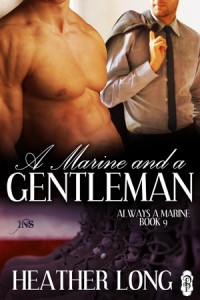 I'm thrilled to announce the release of the latest in my Always a Marine series from Decadent Publishing and the first M/M I've written. The book debuted in the top 100 on Amazon yesterday and climbed to #25. Heather is terrifically fond of both Brenden and Liam and hopes you will be, too.

Lieutenant Brenden Fitzpatrick is a dedicated Marine, loyal son, and devoted uncle, but he's lonely. When he went Marine, the rule was don't ask, don't tell. His brothers-in-arms pretty much didn't ask and didn't care. Watching so many friends settle into long-term relationships highlighted the absence of someone to come home to in his life. When his unit encourages him to give the 1Night Stand service a try, he asks for the impossible—a night with the one man he almost gave up the Marines for in the first place. A man he called best friend but let time and distance carry away.

Liam Gardiner grew up on the same Boston block as his best friend, Brenden. Unlike Brenden, Liam always accepted that he was gay—a fact he didn't mind flaunting to all the bullies and naysayers in school. It got his ass kicked more than once, but Brenden always had his back, rescuing him time and time again, until the day Brenden left for the Marines. He missed his buddy—the crush he never confessed, lest it cost him the precious friendship—so when Madame Eve's invitation to meet Brenden arrived, Liam faces uncertainty for the first time.

Life made them best friends, can Madame Eve help them become so much more?

Liam stepped out of the rental car and handed the keys to the valet. The Dallas nightclub was not at all what he’d expected. Heavy wooden doors offered a gothic touch to the façade. A red canopy stretched out to the circular drive, matching carpet that led to the doors. A doorman dressed in a nineteenth century, double-breasted coat, top hat, and tails held out his hand for the card from the mysterious 1Night Stand service.

“I think I’m going to wait out here. It’s a beautiful night.” Sliding the card back into his wallet, he walked along the curb to a quieter spot away from the foot traffic and arrivals—and, unsurprisingly, no departures. It was just after six-thirty in the evening, local time. After renting the car at the airport, he’d bypassed his hotel to come straight to the club. He hadn’t decided whether he planned to stay the night or not, no matter what he agreed to with the 1Night Stand service.

Even the name brought a half-smile to his lips. The woman who sent him the three emails offered an uncanny and accurate assessment of his situation. At the end of the day, the forwarded request from Brenden prompted him to say yes.

Extracting a cigar from a case in his inner pocket, he trimmed the end off of one and lit it. The fragrant tobacco filled the air and calmed his mind. He handled power lunches and dinners every night of the week. As a professional banker, he knew when businessmen tried to bullshit him or when they had a plan.

He knew how to say no.

He always knew when to say yes. Reading people for a living wasn’t pretty work, but it proved lucrative.

Another couple arrived, huddled together and dashing up the steps as if it were cold. The forty-five degree temperature and dead still air were hardly cold to his Boston-forged blood.

Why Dallas? Liam would’ve preferred to meet Brenden at home, at the Tipperary on the Green, to toss back a pint for old times. But no, Brendon invited him to the cow town in the middle of the country where big boots, big steaks, and big boobs seemed to be everywhere.

Big hair, too. He eyed the next couple arriving. It looks like the 80s threw up on her. He puffed the cigar and kept his acerbic opinion quiet, but the distraction helped.

Thirty-two years old and on the ropes over an invitation to drinks. The drinks aren’t the problem. Come meet the guy I’ve lusted after for over half my life and spend the night with him? Yeah, nothing to be nervous about.
Posted by Heather Long at 8:29 AM