Coming this July, I am going to have my first ever vampire book. Yeah, I know everyone will tell me it is old hat, that people are sick of them, but my By Blood series is really a book of the heart. I am lucky enough thanks to self-pubbing that I can do things like this.

When I was still gunning for a New York contract(2008 time frame) I came up with an idea for a world built within the ton. A group of vampires that had their own rules and classes. Those of the highest order are born, not made, and those that are Made...well, I won't go into the whole rule structure right now. Because I wanted to make sure that people knew it was a paranormal and historical. I had the help of Jenn LeBlanc with the pics and Kendra Egert did the cover redesign(both ladies will be at AAD). This is one of the the books I will be signing, will have all kinds of goodies for at AAD, and one of the two series I will be celebrating at my Cursed N Blood Affair. 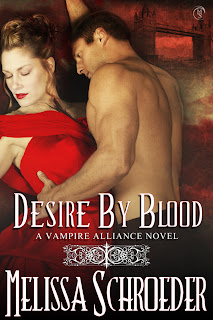 A man with a secret.

Nicodemus Blackburn has seen the best and worst of mankind. Five hundred years of dealing with them teaches the vampire to be very wary of the creatures. Unfortunately, alarming events leave him no choice but to enter the world of the ton to hunt a rogue vampire—one who is making his own army of blood thirsty vampires. Searching for the villain is not the worst of his troubles. That can be laid at the feet of bluestocking Lady Cordelia Collingsworth.

A woman on a mission.

Cordelia has always been an outcast, even in her own family. She has forged her way in the world with her ability to write, and Nico Blackburn is the focus of her next article. Before she can obtain any information about the mysterious man, she is pulled headlong into a scandal that leaves her with no choice but to marry Nico—a man with dangerous secrets.

A passion that consumes them both.

Thrust into a world she knows nothing of, Cordelia finds herself falling in love with a man who claims to be a vampire. As their passion grows, so does the danger around them and Nico will have to call on all of his powers to protect the one thing he has realized he cannot live without: his opinionated, infuriating, and thoroughly delectable wife.

If you want to read the entire first chapter, be sure to join my FB fanpage to read the exclusive content. And check out all the gear made up for it at Cafe Press!


Melissa Schroeder is one of the featured authors of AAD NOLA. She has close to 50 releases in a varying range of genres and heat levels. Her latest release is Possession: A Little Harmless Military Romance. You can check out more on Mel at her WEBSITE.
Posted by Melissa Schroeder at 6:05 PM