CONFESSIONS OF A CONTEMPORARY AUTHOR

First, an admission. I'm a born worrier. I'll worry about anything, even things that no person in their right mind would be concerned about. For instance, my irrational fear of helium balloons flying away while I'm holding them. Yeah, I know. Crazy.

Anyway, in my writing I worry too about things that are at least a little more logical. Such as, are my characters realistic? Are their motives understandable? Do their actions follow what any reader would do in a similar situation in real life? Such are the pitfalls of writing straight contemporary romance. That is why I found writing paranormal such a refreshing change. Now, after writing and releasing "Erato" for Tease's print anthology Love's Immortal Pantheon I, and the short eBook for ARe "Eros' Valentine", the third story I've written in the paranormal erotic genre, Bacchanal, is no less thrilling for me as a writer.

Attending the Authors After Dark event and being able to celebrate my paranormal works with others who love the genre will be a pleasure and I look forward to it greatly. Though unlike Dionysus in "Bacchanal" I won't be attending the parties oiled and nude except for a mask, I still intend on having a hell of a lot of fun.

I hope to see you there!
Cat 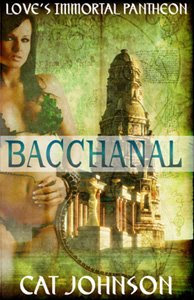 Excerpt and Buy Link at All Romance eBooks
Posted by Unknown at 9:00 AM