For those of us that have been patiently waiting for part two of Smoke & Swan's story in Ms. Mayburn's latest series Iron Horse MC; good news, we're one step closer!

Here is the cover for Exquisite Danger: 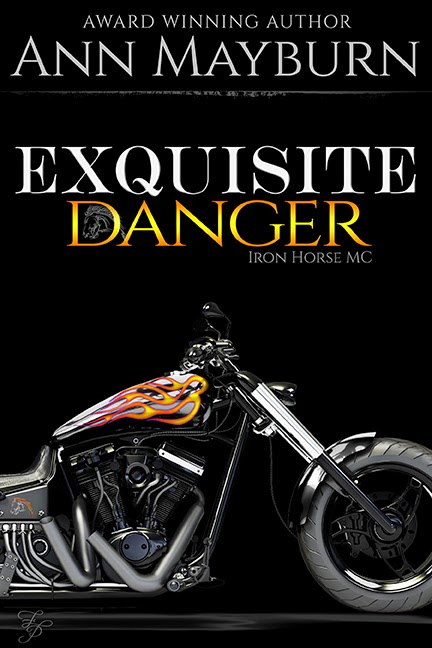 Blurb:
For the first time in my life I know what it’s like to be completely and truly adored by a man who loves me for exactly who I am, a high functioning autistic with more personality quirks than there are stars in the Texas Hill Country night sky.
Some people think my boyfriend, Smoke, is a total biker psycho, a natural born killer who will destroy anyone who threatens what he considers his. They wouldn’t be wrong, but he’s so much more than that. He’s my dark salvation, my beloved fallen angel who is trying with all of his wicked heart to save me from what seems like an entire world bent on either killing me or a fate worse than death.
We’re headed to the Denver, Colorado chapter of the Iron Horse MC, chasing after my narcissistic, junkie mother who decided to steal from some very bad men leaving her two daughters behind to pay the price for her betrayal. My twin sister, Sarah, old lady to the Iron Horse MC president, is looking for my mother as well, but Sarah’s gone rogue and has no one to guard her back which worries me deeply. To further complicate matters, there are traitors in the Iron Horse MC who are working with my mother, not only helping her to escape but also informing my enemies of my every move.

The odds are stacked against me, but I will do whatever is necessary to protect those I love, and with Smoke at my side, I just might make it out of this mess alive.

I'm beyond giddy that it's almost here!!
To tide everyone over here's a excerpt:

While we wait for it's release be sure to check out Part One: Exquisite Trouble!
Buy it at Amazon

Thank you so much for the love, Ms. Green. :D