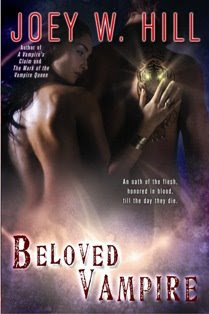 I’m the type that, when I start to read a romance, I get irritated pretty quickly if I’m mired in pages of action, politics and world building. Introduce me to the characters from the very beginning, pull me into their minds, hearts, yearnings, and then build the plot around that. I’m like that weird Kohler commercial, where she wants the architect to build her house around her faucet choice – laughter. However, I think for romance, the relationship and character building is way more than one fixture – it’s the structure/frame of the house.
I’ve been writing paranormal erotic romance for the last few books. While paranormal does have the pesky problem of requiring politics, world-building and/or action scenes, it’s still quite possible to make romance the focus. It’s just a bit trickier. However, the beauty of a series is that, after a few books, you’re at home in that world, and sometimes the muse gives you characters on whose relationship you can focus far more exclusively.

Beloved Vampire, the fourth in my Vampire Queen series, offered that pleasure. Oh, and before you stop reading, yes, it can be read as a standalone, though there will be guest appearances by characters from the previous books. That’s another delightful side effect of writing series – those previous characters tend to jump into plots of your other books. Good friends who show up and say “What’re you doing today? Can I join you? Need any help? Can I add additional word count?” (laughter)

Let me tell you a little bit about the story. Lord Mason is a vampire who’s haunted the Sahara for three hundred years, guarding the tomb of his lost love, a young Bedouin girl. When someone breaks into the tomb, he’s more than ready to let them know the consequences of pissing off a nine hundred year old vampire. However, he finds Jessica, a fugitive from his own world.

For five years, Jessica was forced to be a second-marked servant to a brutal vampire master. She escaped him, but she is dying as the result of a partial third-mark he tried to inflict upon her before she killed him. While she had no control over any of that, she is determined to control one thing – where she dies. An archaeology student before her capture, Jessica wants to finish her life in the tomb of a Bedouin girl who sacrificed everything for love. While Farida’s story is reputed to be mere fanciful legend, her unwavering faith in Lord Mason’s love resonates with Jessica, because she lost her own fiancé to her vampire master.

It isn’t until she finds the tomb that Jessica realizes the tragic irony – her desire to die in the tomb has led her right back into another vampire’s hands. Though of course, she’ll find that Mason is an entirely different kind of vampire – one that a woman might trust and yearn to call Master in the end.

While all my work is character-driven (if I’ve done it right), every once in awhile, the characters lead even more than usual, the strength of their emotions, past pain, and intense need for one another centering the story on them even more tightly. Mason and Jessica were those kind of characters.

I love writing erotic romance because every story is like dancing a tango for the first time—the complex give and take, the provocative footwork, between two strong people falling in love. I hope you’ll enjoy dancing with Mason and Jessica. You can find the official blurb and a free excerpt at my website, http://www.storywitch.com/, under the Vampire Queen series link. Oh, and you’ll notice there’s a TwoLips scavenger hunt icon there – Two Lips reviews site is having a month long scavenger hunt with bunches of prizes available from over a hundred participating authors, and my giveaway is a signed copy of Beloved Vampire.

Counting the days until I get to meet you all at the Authors After Dark conference. Until then, happy reading!
Posted by Joey W. Hill at 8:27 AM

Anyone who knows me knows I don't read vamp books, but I LOVE yours.Jacob and Lyssa are timeless, and hes a hero every woman wants. I'm up to Danny now, so I'm gearing up for Mason and Jessica, but OMG I do love this series.

Your getting fan girled at AAD. Just a heads up LOL!!!!

Stella, This was a great comment to find this AM after my Wal-mart grocery shopping ordeal (laughter). I feel much more rejuvenated!

Oh, and I don't mind getting fan girled at all - I'll be in awe of all the talent surrounding me (including yourself, of course!) so it can be a reciprocal thing. :>

OMG. the amazing talent gracing the event this year is out of control. Audra and I are just lucky to be able to be there, with so many people we read and look up to there its going to be completely insane.

I just hope we dont make too poor a showing LOL. And I cant wait for your mini event either!

Hi Joey, the best part of reading a great series is when previous characters come by for a quick visit. I can already tell that Jessica and Mason's story is going to knock my socks off, I can't wait to start it.

Stella, you won't make a poor showing at all. And the work you all have put into the Authors After Dark conference is amazing. The fun part of being at the "very first" is we all get to have fun with the unexpected (grin). A lot like a wedding - there will be things that go wrong, but the main event, the main purpose - bringing together readers and authors who love these genres - will be perfectly right.

Cathy M, hey there! Oh, gosh, WAIT until Jacob & Lyssa and Danny & Dev show up for the last third of the book. As an author, it was so much fun to write those final scenes - and Lyssa had some real surprises for me.

I may have to go back and read all three of the first books again! I've been waiting for this one. I love reading series for the same reason you like writing them: in addition to feeling like the setting (even around the world) is "home", I like having people I've met before come back.

Elizabeth, thanks so much for that. I loved spending time with Jacob & Lyssa and Danny & Dev again. And often, as I noted in the post, the author has no choice about it, because those characters from other books INSIST on taking part in the new story (laughter).

"I’m the type that, when I start to read a romance, I get irritated pretty quickly if I’m mired in pages of action, politics and world building. Introduce me to the characters from the very beginning, pull me into their minds, hearts, yearnings, and then build the plot around that. I’m like that weird Kohler commercial, where she wants the architect to build her house around her faucet choice – laughter. However, I think for romance, the relationship and character building is way more than one fixture – it’s the structure/frame of the house."

Vampire stories totally make my day! It’s cool how the characters are supernatural. I’ve never encountered a vampire story I didn’t like. This story of Jessica and Lord Mason is no exception! Totally adding it to my collection, haha! I’d love a full version of this story!