Now through March 7th, my newest release, Callum, is free on Amazon! This is the first of The Cursed Clan series which will be featured along with my upcoming Victorian vamp series By Blood at my Cursed n Blood Affair at NOLA AAD. Below is the blurb and the links for the book. Please spread the word! 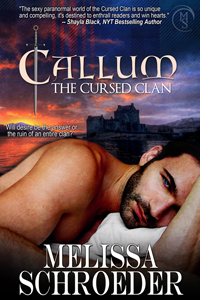 Will desire be the answer or the ruin of an entire clan.
The Cursed Clan, Book 1

As Laird, Callum Lennon feels he has always failed to protect his cousins. Callum's impulsiveness caused the death of his father and the experience has scarred not only his body, but his soul. From that point on, he made sure to always go with the more logical choice in every matter. When his younger cousin Angus finds clues that might help break the curse, Callum begrudgingly hires Phoebe Chilton to investigate. Callum doesn't like bringing outsiders into their family affairs. Their life would become fodder for the tabloids if anyone were to find out about the curse. It doesn't help that the instant he meets Dr. Chilton he's attracted. But, he doesn't really have a choice because she might be their last hope.

An expert in archeology, Phoebe has always been dwarfed by her parents' shadow. Their high standards had her in college by thirteen and earning a second PhD by twenty-two. But her career and her broken marriage have left her needing something more than just diplomas and degrees. She wants to prove that her interest in legends, especially Celtic legends, is as important as her parents' work. When the Lennon family contacts her, she sees the opportunity to win a massive research grant. With a long-time rival breathing down her back, she jumps at the Lennons' offer her, hoping it will ensure her the grant. But uncovering the Lennon family secrets, and her attraction to Callum, could prove more than she can handle.

Forces outside the family are determined to ensure that they fail. When an old enemy threatens both the well being of the clan and the fragile new love, Callum will have to choose between believing his mind or his heart.

This is a paranormal sensual romance, approx 65000 words. It is the first book of The Cursed Clan.
Posted by Melissa Schroeder at 10:08 AM