Just popping in guys to announce that we have a new book out! Book two of our American Satyrs series, To Collar and Keep has been released this morning, and I know you guys are all interested!

A surrender to the unknown has never been sexier. 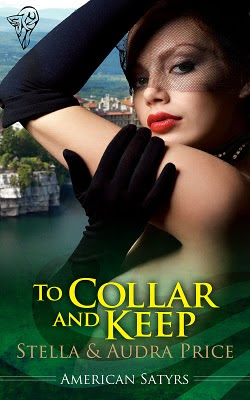 Olanis, the summer holiday is upon the Satyr clans once more and it is the time for Harlequin, prince of the Rummer clan, to claim his first and only female, the Grecian Satyr princess Arabella, sight unseen.

Unsure of what kind of woman his clan had brokered for him, he is both interested in the woman that would wear his collar, and nervous that she won’t meet his standards. His female has to rival him in all things, and his hopes of that coming true are slim and none.

Arabella craves two things, finishing her education, and being claimed by her Satyr. An anomaly in the Satyr world, Arabella was afforded opportunities other princesses weren’t. Now, in a foreign land she is given over to the Prince she was promised to, and she couldn’t be more nervous. What's a girl to do when you’re being gifted to a man you have never seen?

Harley is a commodity to the Rummer clan, one that his father plans to exploit regardless of his son’s wishes. When he gives Harley an ultimatum, Harley and Bella have two choices-agree to the terms or rebel.

When sparks fly and new alliances are forged in the Satyr ranks, both Harley and Bella have to decide what it is they want and what kind of future they wish to have. Only together will they succeed, if they can suffer the slings and arrows.

Reader Advisory: This book contains a Satyr prince with unconventional ideas about his princess, a princess with a mind to rival Hawkings, a feral Satyr with a hidden agenda, F/F scenes, polyamory and lots of hot sex.

And thats more, We are running a contest! Check out BLOGGY for details! See you all on Friday!
Posted by Stella Price at 8:29 AM